Where Have All the Children Gone 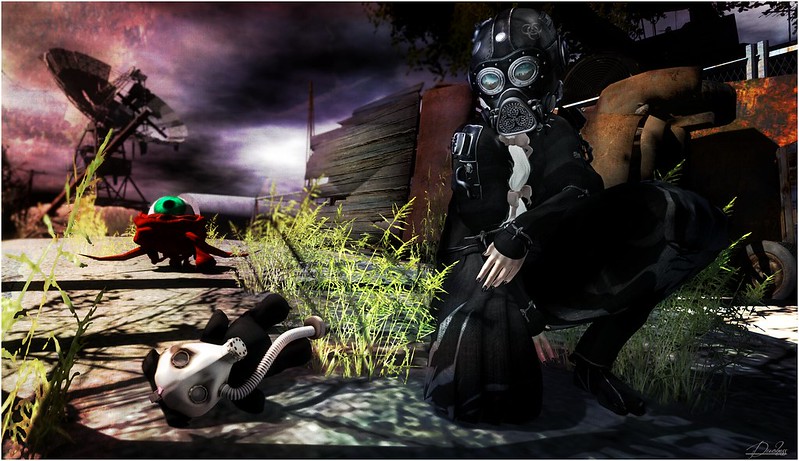 Upon landing at Wasteland the eerie voice of Joseph Kerschbaum sounded in my head and I began to silently mutter “Where have all the children gone… ” as I scanned the streets for signs of life. I happened upon a lone teddy abandoned in the cracked streets, upon closer look it didn’t appear to have been there for too long. This indicated that life in this sector could possibly exist, at least life in the not too distant past. A rustle in the bushes distracted me and a Roving Eye appeared and focused on my foreign body. The government’s sight into a world they helped destroy, their last efforts to keep the citizens under control in the harsh environment. I held my breath hoping not to be discovered. I wanting to curse their denial of climate change and their resistance to embrace a cleaner world as it would hamper the lining of their deep pockets. The rover moved on and I continued to look for life at the shelter. I walked down a ramp to a room with glowing water and heard a shriek from above “Don’t go down there,  it’s toxic for humans.” It was James, he was still alive…..

The creaking silence of age echos through the streets.
Sounds like old wooden floors under heavy feet.
All of the children once running around have evacuated
Or maybe they’ve just disappeared

Just yesterday they were tying ribbons in trees and swinging from the branches.
They were leaping over hot coals and swooning at anything

Those of us who remain wonder around like abandoned children in shopping malls.

Emptied by the fingers of fathers
Emptied into the flesh of their sons and daughters.

Welcome to the Cabaret